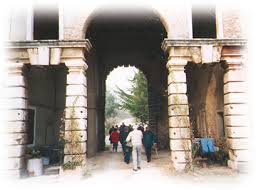 “The complex, which in its current form dates back to the seventeenth and eighteenth centuries, is located in a strategic position along the road that led from the Val d’Adige to the Po Valley.

The name “Campara” derives from the “campus”Roman, to remember that this place was a place of encampment of armies. In the eighteenth century the Venetian Republic confirms the military vocation of the town, choosing Campara as the only stopping point for the Austrian troops that crossed the Venetian territory, directed towards Lombardy.“The choice of the unification of the 3 stages in one of Campara lucky he found an ally in the old tenement building already recreation accounts Nogarola-Maffei, but at the time in a state of general neglect because of the war” (Brugnoli, 1969) .

The whole manor had logistical advantages for its thirty rooms, stables capable of accommodating forty horses, the amplitude of the inner courtyard, as well as the surrounding meadows. Thus was born the military stage of Campara with a “commissioner of the stage” and a specific order.” 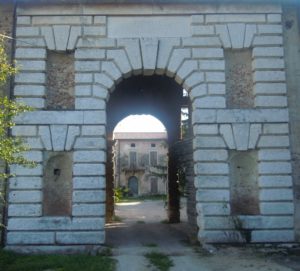 “in this new role the former villa Nogarola experienced burning and looting, in 1794, after a fire, the floor was added in order to increase housing for the military. Few years later, in 1796, french troops attacked furiously on court Campara “depredating and stripping it of everything, including doors, windows and railings.”

With the Lombardo–Veneto the stage of Campara “loses much of its important function and goes back to sleep peaceful peasant families” (Brugnoli, 1969). complex occupies three sides of a large courtyard that opens to the east towards the Adige and the Valpolicella. one of the most valuable is the entrance portal located in the north wing, outside the arc tarp is inserted in a prospectus rustication that has four openings, the upper pair is buffered while the lower one contains niches.

Above the portal is found an inscription, now abraded. Towards the courtyard, the entrance has an elegant serliana; decorative elements such as the robust rusticated, the pillars, the keystones in the style of Sammicheli that, in the territory of Verona, had many supporters in the seventeenth and eighteenth centuries until the early nineteenth century.

The main body is set on the sides to the south and west; in the face of the grand entrance, you will find the main prospect that, in the central sector presents the entrance with rusticated decoration and a balcony with wrought iron balustrade of invoice eighteenth century. The windows have simple stone cornices completed by cornice.

The same reasoning is found in the facade at noon from the orchard while the table facing the Adige to the east, access to the vaulted cellars with ashlar jambs has made ​​appositivamente for the passage of the barrels on the wagons.

At present the buildings, divided into different properties, were partially abandoned or tampered with by restructuring incongruous. Despite the construction of the canal Biffis has partly altered the relationship of the building with the surrounding environment, it has preserved the vast orchard to the south-east of the villa with the wall of stones and pebbles. “

This website uses cookies to improve your experience while you navigate through the website. Out of these cookies, the cookies that are categorized as necessary are stored on your browser as they are essential for the working of basic functionalities of the website. We also use third-party cookies that help us analyze and understand how you use this website. These cookies will be stored in your browser only with your consent. You also have the option to opt-out of these cookies. But opting out of some of these cookies may have an effect on your browsing experience.
Necessary Always Enabled
Necessary cookies are absolutely essential for the website to function properly. This category only includes cookies that ensures basic functionalities and security features of the website. These cookies do not store any personal information.
Non-necessary
Any cookies that may not be particularly necessary for the website to function and is used specifically to collect user personal data via analytics, ads, other embedded contents are termed as non-necessary cookies. It is mandatory to procure user consent prior to running these cookies on your website.
SAVE & ACCEPT
View Cart Checkout Continue Shopping
0